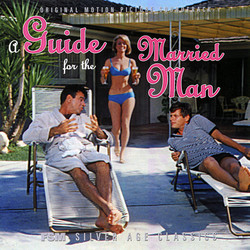 A Guide For The Married Man

Review: Guide For The Married Man, A

It was a time when John Williams was called "Johnny", and he was better known for his television work instead of his feature films. So it was that Williams scored the farcical romp, A Guide For The Married Man starring the late Walter Matthau. Directed by Gene Kelly, the film explored how one might be able to have an extra-marital affair. Ed Stander (Robert Morse) gives Paul Manning (Matthau) lessons on how to cheat on his wife. The irony being that in the end Manning can't go through with it since he loves his wife too much, and Stander goes to divorce court!

The first song heard is the rather wacky "Guide For The Married Man", performed by The Turtles. It's a groovy little song that once you get accustomed to the theme, you just can't help but enjoy. Williams' score sounds like a nice combination of Henry Mancini, "Laugh In", and a Frank & Annette beach party. It's fast, it's peppy, and it's got "1967" written all over it.

But don't let the fact that this score is dated keep you away from it. At its heart, it has many of the enjoyable Williams traits that we all loved about his television work. The great use of brass and woodwinds, and (of course) the exceptional string work. My favorite cue in the whole album has to be "The Globetrotters". There we get to hear Williams do a take on the John Barry "Wall of Brass". It's very James Bond, with a flare of Mancini. The punch brass hits in conjunction with the sweeping strings just made my day. I hit "repeat" and listened to it a few times - it's just that good.

There is a bit of "Mickey Mousing" in the score - after all, it's a farcical comedy. But the catchy main theme permeates the album, and the go-go music keeps your foot tapping. I found it interesting that some of the motifs used in the score seem like earlier ancestors to some of Williams' more famous themes. You can't make a direct-line comparison, but there are just a few moments that sound a bit too familiar.

There are also a few bonus tracks included on the album, including some source music (as well as a track by Frank DeVol) as well as some alternate cue takes. It's a rather hearty album and runs 73 minutes long. The liner notes and packaging are high quality, and very informative.

This album just received my "Guilty Pleasure" award for the most fun-score of the summer. While I can't say that I will keep it in my CD player all the time (I have too much to review to allow for that), it is certainly an album I will revisit from time to time, at the very least to listen to "The Globetrotters". It's available exclusively through Film Score Monthly, and you should definitely check it out.