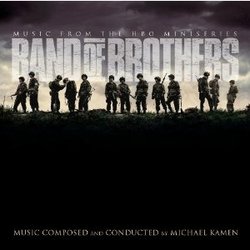 It was a great day for me when I learned that Michael Kamen would be scoring Tom Hanks and Steven Spielberg's epic ten-part World War II docudrama Band Of Brothers. After being unfairly ambushed by several million internet fanboys for his absolutely fine score to their beloved X-Men - simply because they didn't get any of the Danny Elfman oom-pah theatrics they'd been imagining for ten years - Kamen has become the quintessential underrated composer as of late. (Of course, when Kamen released his magnificent "The New Moon In The Old Moon's Arms" millennium symphony a few months later, none of those jaded folks even bothered to take notice.)

Needless to say, I was excited by the thought of Kamen being given the opportunity to write music for such powerful subject matter as HBO's presentation of historian Stephen Ambrose's book. It is a scenario that doesn't seem to come Mr. Kamen's way nearly often enough, in my opinion. The resulting score release, from Sony Music and Hanks' Play-Tone Records, is a massive seventy minute affair that spans the entire show and then some.

The disc opens with the "Main Theme", a deeply elegiac hymn for orchestra and chorus that paints into all the corners of John Williams' Saving Private Ryan while still maintaining its own musical identity. Clearly, one look at the poster for the series tells you that the folks in charge here not only don't mind such comparisons to Spielberg's consummate WWII masterpiece, but are no doubt hoping we'll make them and decide to tune in. That being said, the next two cuts on the album are a pair of lengthy suites culled from various sections of the score emphasizing the kind of Robin Hood-style heroics that never turned up anywhere in the patently reverential Private Ryan. Indeed, fans of Kamen's colorful work on that old Kevin Costner debacle will find much to their liking here. From sprightly galloping strings to David Lee's majestic horn work, Kamen wants the world to know flat out that this is no Williams clone.

After nearly an entire Varese-disc's worth of this material (which is alone worth the price of admission), Band Of Brothers settles down into nearly fifty more minutes of chronological episode-specific material. Gone is the over-the-top energy of the previous suites, instead supplanted by a considerably more subdued and often menacing tone. "Swamp" is a lovely and delicate piece featuring Jonathan Snowden's flute, turning quite dark in its last few seconds. "Parapluie" is another highlight, featuring nice string writing and an arpeggiated harp figure. "Bull's Theme" is nice and ominous as well, and cues such as "Winters On Subway" frequently feature the sensitive solo piano of Simon Mulligan and Sally Heath.

The female chorus of "Plaisir d'amour" serves to keep things relatively fresh, as does the addition of an excerpt from Beethoven's "String Quartet In C-Minor". But the score proper's major setpiece is "Discovery Of The Camp", an eleven minute distillation of all the aforementioned elements. The album rounds out with a restatement of the main theme in "Band Of Brothers Requiem", featuring the vocals of Celtic songstress Maire Brennan as well as Kamen's own daughter Zoe.

This is a great album, and a fitting tribute to the brave men depicted in the series. And after reading the last of Kamen's touching thank-you's, it's even more clear how much this project is near and dear to his own heart. As a listening experience, the only caveat I could mention is that Band Of Brothers is a hell of a lot to take in at one sitting. But considering the sheer size of what it was written for, no one is saying you have to hear it all at once to thoroughly enjoy it.