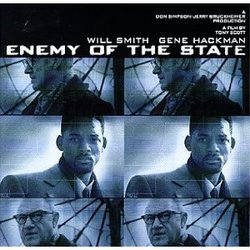 Enemy of the State

Review: Enemy of the State

by Josh Wisch August 24, 2000
2 / 5 Stars
Enemy of the State is vintage Bruckheimer. Don't get me wrong, Trevor Rabin and Harry Gregson-Williams definitely deserve the credit for the music. All I'm saying is that when you go to a Jerry Bruckheimer film ( Beverly Hills Cop, Top Gun, Days of Thunder, Crimson Tide, The Rock, Armageddon, etc), you expect a certain type of movie. The same is true of the type of music you expect from these films. Enemy of the State is no exception.

The fun part of this score is that it combines fairly distinct elements: techno, conspiracy music, and soulful action thematics. It seems to be part- Saint, part-Chain Reaction, and part-Armageddon. The type of music works well with the film. Tony Scott directs Will Smith, Gene Hackman, and a number of other notables (including Gabriel Byrne and Jason Robards in two wonderful but brief roles) in this techno-thriller. In it, the Fresh Prince himself plays a man who does not realize he is in possession of a diskette that could bring down the Assistant Deputy Director of the National Security Agency (unlucky position to find oneself in). Unlike some other conspiracy stories, he has reason to be paranoid. As Smith learns more of his predicament, and involves more people in it, the movie's action increases, as does it's twists and turns, and also its humor. Scott directs the film in his typical frenetic pace. To keep pace, Rabin and Gregson-Williams use a number of segues between the techno and theme driven sections of music. The opening track ("Main Titles") is a perfect example of this. This method does level off a bit from there on in, but they continue to vary between musical approaches. There are some sections of the score where the action element lays off quite a bit as the music becomes more moody and conspiratorial.

The actual "Enemy of the State Main Theme" is straight out of a Con Air, The Rock, Armageddon, Face-Off, Speed medley. It has a hint of action underneath it represented by some screaming chords.... but with restraint. The percussion adds to a sense of urgency that is ever present in the score. On top is a mournful melodic portion that captures nicely the feeling of desperation Will Smith's character must be feeling. After all, the guy is caught in a situation of which he has no knowledge, yet which is quickly unraveling his life (think of The Net: credit cards cancelled, fired from job, phony criminal record, etc). This kind of action / desperation mix in the music appears multiple times throughout the score, as other characters endure similar situations during the film (one example is Track 6, "Zavitz Chase Part 2", especially nice at about 1:45 through this track). The restraint is a nice touch. I am a fan of Rabin's previous work, and greatly enjoyed the Con Air score. With that score, however, I did feel that some pieces were a bit unintelligible. Whether due to the nature of the film, or by his experience since then, the Enemy of the State score is more focused. It features less wild percussion and screaming guitars, and more thematic work.

Overall, I would recommend this piece for someone who appreciates the type of music featured in Jerry Bruckheimer / John Woo / Jan De Bont films. This could be considered too much of a generalization, but I often look at people like Trevor Rabin and Harry Gregson-Williams as being in the "Zimmer School" of film composing. Other inductees would include the likes of Mark Mancina, Jeff Rona, Nick Glennie-Smith, and John Powell. If you enjoy soundtracks that have an electric guitar edge to them, this is a good one to pick up. If you don't want to stray far from Misters Horner, Williams, and Goldsmith, you may want to look elsewhere. Although, this does have some elements that might lend itself to Goldsmith fans (ala Chain Reaction) due to the conspiracy feel of the picture. Personally, I'd rate this one as a keeper.

Review: Enemy of the State

by David A. Koran August 24, 2000
2 / 5 Stars
I always enjoy films where John Voight plays a real bastard of a guy, his last effort of Mission: Impossible as Jim Phelps and his recent portrayal of Thomas Brian Reynolds in Enemy of the State are two of his better takes. His portrayal of an NSA director bent on passing the Telecommunications Security and Privacy Act passed through Congress is the main impetus that drives the theme of the film. Will Smith plays labor lawyer Robert C. Dean who is unwittingly caught up in the conspiracy in a film best described as The Fugitive meets All The President’s Men. Contributing composers Trevor Rabin and Harry Gregson-Williams integrate that idea of electronics seamlessly in the score without overwhelming it with annoying noise that does prevail in many of the scores that go along a similar idea. It& #146;s a very slick film and the musical requirements are the same and aptly provided by the two. However, it fits well in the film, but as a CD release it’s not something you’d pop in for a soothing evening.

The more personal moments in the film are scored with subtle arrangements which I’d attribute more to Gregson-Williams due to knowing his outstanding work on The Borrowers. The more synthetic and atmospheric moments are most likely scored by Trevor Rabin based on his work in Armageddon. Having both of these guys working together allow the disjoint musical elements fit together more seamlessly rather than having a single composer stretch beyond the bounds of his talents. The ominous nature of many of the moments in the film have a synthesized underscore if nothing more than to darken the moment. At points they do pick up and transition to a more techno-rock driven action appropriate cues that are occasionally integrated into true and synthesized orchestral arrangements. At times this comes from a Zimmer and Mancina inspired approach to pumping up the excitement without adding to many layers of instrumentation. The score suffers at items from the lack of many identifiable themes as heard in a number of recent big budget films. But then again, having a driving heroic theme may actually distract from the story of the film, so it’s appropriateness may be debated. The use of more electronic elements does fit well with the sound effects that are pumped up a bit more in the film, integrating the music with the soundscape more so that a straightforward acoustical score.

I was living in D.C during the filming of the movie and was happy that they stayed close to the actual geography of the city unlike many films that alter and compress the area and location. Along with that I’m currently working with an Internet security and privacy company and the techniques and methods used in the film are true, and the subject of personal security and privacy is near and dear to my own heart. I recommend the film on these two accounts as well as the fact that overall, it’s a pretty good film that stands on it’s own as a taught and exciting techno-thriller (with a touch of humor) on par with many of the Tom Clancy movie adaptations of the early 1990’s. Musically, the CD covers much of what was in the film, but as mentioned earlier, most of it is lacking in strong memorable themes.