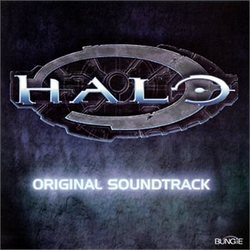 The world of game music has made leaps and bounds in the past few years.  Composers like Nobuo Uematsu ("Final Fantasy"), Jeremy Soule ("Total Anailation", "Morrowind"), Bill Brown ("Rainbow Six") and Michael Giacchino ("Medal of Honor") have been making strides in the realm of both synth and live orchestral performances for console and computer games with some amazing results. When computer games first caught on,  little electronic tones were the extent of sound with very little or no musical score element, games now employ not only a full spectrum of sound effects that rival some of the big Hollywood films, but sometimes full orchestral music or very high quality synth instrumentation to go with it, thus immersing the gamer in the world of the game they are playing.

"Halo: Combat Evolved", was one of the original titles that shipped with Microsoft's X-BOX game system during its initial release in late 2001. The title was conceived by Bungie Studios, a long standing company that had a great track record ("Marathon", "Myth", "Oni") in good solid games. Bungie first tackled the subject of "first person shooters" with "Marathon", the first "Doom"-style games for the Macintosh back in the early 1990s. Within the three games of the "Marathon" saga, the games employed the use of a very simple, yet freaky sound design and score, almost a Mark Snow type of atmosphere that worked perfect with the game. So when I heard about "Halo" I got very excited about the whole thing.

The score for "Halo" is a very techno-ish score with some of the" Media Ventures"-styled action music that most people have come to expect, yet composers Marty O'Donnell and Michael Salvatori have given the gamers of "Halo" an action pumping ride of a score, filled with theme, rhythm and soul.

The Main Title theme comes in the form of a choral performance in the track "Opening Suite". The choral work is a comprised of a deep male choir and is stunning example of something truly epic, not something usually seen in video games today.  In "Truth and Reconciliation Suite" the track takes on an almost Gettysburg-like sound and thematic quality then blows right in to the action music. The action music is made up with some fun brass and string work and chorus thrown in just for the fun of it.  This suite track is mixed with various elements of the "Halo" score into one great listen, and really sets the tone for the rest of the album. Another highlight, "Perilous Journey" is a very interesting track. It's almost like Hans Zimmer and Brad Fidel got in a room and wrote this one. Using beat elements from Zimmer's action scores and something like True Lies from Fidel, the track makes for a very fun and interesting listen. The album is largely made up of action music tracks - as this is a game about combat, the two usually go hand in hand. It is a great action score, especially for gamers.

I must admit, though, that the CD does get a bit boring after a while. There feels to be a lot of repetition on this CD, and I think a shorter CD running maybe 50 minutes could have been a better listen.  Clocking in at around 65-minutes in length, this album can be overbearing at some points. It also feels a bit bi-polar at times, jumping from high action to total ambiance and nothing.

While the score itself is very interesting, covering all ranges of music and thematic elements, like most game music (with the exception of the "Final Fantasy" games) it sounds better in context of the game. If you're a fan of the video game music (and the game), I'm sure you already own this one. But for a casual player of the game or a casual listener of game music, a listen or two might be needed to see if this fits you. This score is not for everyone, but than again, not everyone has the patience for video game music.