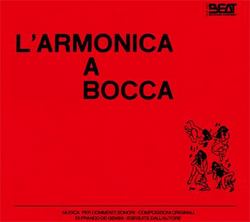 At the time speaking, the two LPs were released with a simple red cover that featured four harmonica players hand drawn by a contemporary artist, from which we have again taken the theme. Both albums were recorded soon after the artistic affirmation that occurred thanks to his performance on the score for C'era una volta il west, after which music featuring Franco De Gemini's harmonica was more in demand.

L'armonica a bocca di Franco De Gemini, created together with his friend Alessandro Alessandroni and other composers, is full of cues that would have become great successes in Beat Records' catalog, mainly in the label's involvement with syncs (library music). Meanwhile, L'armonica a bocca is a drier album, almost experimental, and dedicated to synchronization in a minimalist key.

Two LPs with opposite features that rightly widen your cultural spectrum regarding the work of one of the best harmonica players of all time, now available together as the third chapter of the series dedicated to him. The CD is packaged in a slim jewel case with maxi-inlay and external obi, fully remastered and featuring liner notes by Daniele De Gemini.