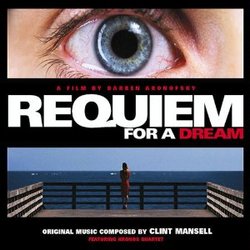 Requiem for a Dream

Review: Requiem For A Dream

Those of you seeking symphonic, heavily thematic scores, look elsewhere. Judging from his track record - most notably on Darren Aronofsky's Pi, and his present Requiem For a Dream - Clint Mansell is not your man. This easily overlooked atmospheric gem is scored for five musicians - namely the modern/minimalist champions the Kronos Quartet, with Mansell himself on electronics.

There's not much that one can elaborate on from there, really. The main theme from the score is a very sparse three-chord progression, repeated often enough to become engrained in your mind after the opening "Summer Overture". This is followed right off by "Party," a motif evoking Mansell's electronic work on Pi. The other theme - and my favorite of the lot - is the "Ghosts" theme, which features an almost chorale-like electronic line accompanying eerie strings.

All in all, with the exception of some rather creepy "tense" music in the final third of the album, this score is very subtle, rather quiet, and always very moody. A fine album to have on while reading or working, but don't let it's role as "furniture music" fool you; even without your full attention, this is a score that will stick with you.