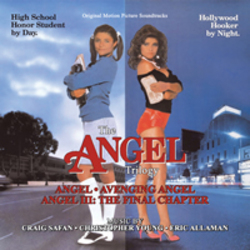 Featuring music composed by Craig Safan, Christopher Young and Eric Allaman for the three gel feature films released during the 1980s. The Angel Trilogy collects the music together on one CD, including the premiere release of Berlin Game's score for Angel III: The Final Chapter.

The soundtrack to Angel was composed by Craig Safan, who was then scoring a number of low- to moderately-budgeted thrillers. Safan was given a week to compose the score, as he learned that he was replacing someone else's score. The theme for Angel is performed by a small orchestra favoring flute and strings, enhanced by a soft synth sound that resonates in a kind of glass harmonica fashion. This is the sublime music that represents Molly the schoolgirl. In contrast, the straight-ahead urban groove of Hollywood Boulevard reflects Angel's outward, street-walker persona that she adopts to make ends meet on her own. These two elements offset each other throughout the score.

Angel also included a great deal of source music, including the signature song, "Something Sweet." This release includes a new version of this song, arranged and produced by synthesist Dominik Hauser, who carefully transcribed the music to replicate a new recording of the song.

For Avenging Angel, Safan was involved with scoring The Last Starfighter at the time so the producers hired a new composer, Christopher Young. He had barely scored four films when Avenging Angel crossed his path. Young enhanced the second movie with an approach similar to Safan's, contrasting a soft and empathetic theme for Molly with a mix of jazzy trumpets and rocking electric guitars to personify the street that Angel must return to in order to avenge her fallen friend.

To score Angel III: The Final Chapter, the electronic duo Berlin Game (Eric Allaman and Reinhard Scheuregger) was hired, but Scheuregger, however, was committed to touring Europe with The Motels' Martha Davis, giving Allaman the bulk of the labor on scoring the film. The music is a pure electronic score, enhanced with a live saxophone and electric guitar.

Remastered by James Nelson at Digital Outland. The booklet includes liner notes by author Randall Larson, including recent insights from the composers on these three scores.