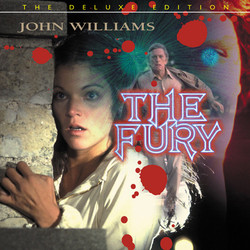 The Fury - The Deluxe Edition

Themes of psychological horror were proving to be most popular in Hollywood in the seventies once The Exorcist took a hold of audiences in 1973 (though the spark of interest can date back to 1968 with Rosemary's Baby). It was not until the year of 1978 that another pivotal turning point in motion picture horror came with the release of John carpenter's Halloween however, but the intervening years between the two were most certainly not without other exploits in the genre.

Following his success with Carrie in 1976, director Brian DePalma tackled somewhat related subject matter in another adaptation of a novel, this time with John Farris' The Fury. It's a film that perhaps shies a good way from being great. This is not to discredit it entirely mind you, for DePalma's skill behind the camera does make a watchable thriller out of what could have been a complete disaster in the hands of a lesser director, and the lead performers too (Kirk Douglas, Amy Irving and the late John Cassavettes) all put in good enough performances, but it is truly the score that stands as the films greatest asset.

By this point in '78, John Williams had already given much to the world of film music with scores for a number of popular disaster epics, Hitchcock's final feature and of course the early works of director Steven Spielberg, and it was not long after Spielberg's Close Encounters of the Third Kind that Brian DePalma sought Williams to score The Fury.

The resulting score is vintage Williams, a shameless love letter to Bernard Herrmann at its core yet a score left sadly unheard by many. In 2002 Varese issued a Deluxe Edition - a double CD release limited to 3,000 copies comprising of the original soundtrack recording on disc one, and the album re-recording on disc two.

Marking the first ever release of the complete original score recording, including some unused material, disc one totalling twenty-three tracks in all is certainly where the meat of this release lies. The score serves to be a highly effective ominous, often schizophrenic treat where calls to the relentless driving penetration of strings so common in Herrmann's thrillers surface in maintaining the tension. "Gillian's Power," the penultimate track, proves to be an exceptional climax in highlighting this fact, strengthened here notably by the presence of a theremin. The score was one to add a great deal of credence to the rather clichéd hokum unfolding on screen, but outside of the film the score remains equal in enforcing a tremendous presence in its own right.

With the listener often left feeling both psychologically and physically stalked we are allowed moments to breathe, a favourite being "Before Dinner" which whilst short and sweet is effectively calming without losing its sinister undertone. We rarely seem to be without the theme haunting us in one form or another.

The content of disc two represents the original score album released in 1978, a re-recording with the London Symphony Orchestra recorded in England, according to the liner notes, during a short open window Williams and the orchestra had prior to beginning their collaboration on Superman. There are nine tracks.

The re-recording serves to be an interesting listen, and far from necessarily being an inferior one to that of the original recording. The re-addressed orchestration for the music represented on the original album certainly resembles that certain symphonic sound Williams' works took on as he approached the 1980s, the resulting quality also thanks in part to the London Symphony Orchestra itself, for it certainly bears that often recognisable LSO sound. I actually came to instantly prefer the more embodied sound of the film's main theme as heard in track one ('Main Titles'), and most notably in "Epilogue," track nine, which in addition plays out on an absolutely exquisitely sombre note venturing thematically into an area the original score recording does not quite reach.

So finally comes the unfortunate reality for those who have yet to own The Fury. The Deluxe Edition has since sold its entire run, and the separate re-recording release remains out of print in its own right, leaving collectors to scour the internet in the hope of finding either version. Once found, it is certainly a score to cherish, and I say that obviously of the Deluxe Edition first and foremost, but the re-recording itself is by no means a disc one should turn a blind eye to should it be found.