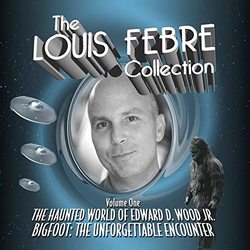 Dragon's Domain Records, to be distributed through buysoundtrax.com, presents The Louis Febre Collection, Volume 1, featuring music composed by Louis Febre for two projects from his extensive filmography, Bigfoot: The Unforgettable Encounter and The Haunted World of Edward D. Wood Jr.

Bigfoot: The Unforgettable Encounter was one of the many films Louis Febre scored for PM Entertainment. Released in 1994, Bigfoot tells the tale of a young boy named Cody who befriends one of the legendary forest creatures in the Pacific Northwest wilderness, and then risks his safety to save the Bigfoot when hunters place a bounty on the creature's head. Febre's score is appropriately family friendly music, nothing too aggressive or scary, but quite melodic and the score fits the tone of the lighthearted adventure film, focusing on the character interaction and the moderate skirmishes in the storyline.

Brett Thompson's 1996 documentary film The Haunted World of Edward D. Wood Jr. was a sincere labor of love, tracing in detail the strange and perhaps unsettling career of the low-budget filmmaker whose means never seemed to meet the needs of his creative ambitions. Febre composed a delicate and compelling score with moments of striking melody and fragrance, from the serenity of his prologue music through the various pieces accompanying Wood's story and culminating with the melancholy denouement.

Dragon's Domain Records presents The Louis Febre Collection, Volume 1 on compact disc for the first time, featuring music composed by Louis Febre. The music has been mastered by James Nelson at Digital Outland and includes liner notes written by author Randall Larson with the participation of the composer.