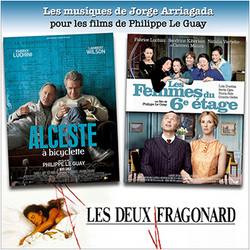 Based on real historical facts, Les Deux Fragonard tells off the conflict between two members of the same family in the eighteenth century, who are accomplished artists in their respective fields: Jean-Honoré Fragonard, a successful painter and ladies' man, and his cousin Cyprien, an anatomist attracted to death and fascinated by the mechanics of the human body, which he likes to dissect using stolen corpses. Jorge Arriagada obviously had a tremendous time exploiting the richness of the contrasts between two worlds of light and shadow, of springy jubilation and existential torment, to deliver a wide variety of entrancing themes performed by a symphony orchestra.

Philippe Le Guay called again on Arrigada in 2010 for the delicious social comedy, Les femmes du 6e etage (The Women on the 6th Floor), starring Fabrice Luchini and Sandrine Kiberlain playing a bourgeois couple in 1960s Paris whose life is turned upside down by the group of Spanish maids living in their building. Arriagada delivers a colorful, warm and witty score that contributes much to the success of the film.

The original music of the most recent film by Le Guay, Alceste a bicyclette completes our program. This comedy brings back a Luchini perfectly at ease in the role of a bitter actor who is persuaded by a friend to return to the stage to play in The Misanthrope by Moličre. Arriagada's short contribution brings dynamism and emotion to this dialog-rich film. Our limited edition of 500 includes a fully bilingual 12-page color booklet.