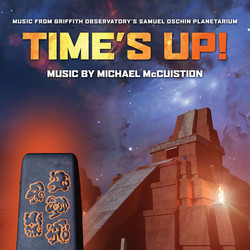 McCuistion's breathtaking, thrilling and deeply emotional score was so notable in Time's Up that it has been used in portion to accompany other Griffith Observatory programs and exhibits. This special release was produced by the composer, mastered by James Nelson and features exclusive, in-depth liner notes by writer John Takis and celestial art design by Dan Goldwasser.