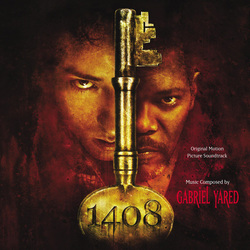 I said flippantly in a previous review that you never know what Gabriel Yared does next. And then, here you go. Sure, doing a foreign drama like The Lives of Others sounds like a very Gabriel Yared type of thing to do. But then after that, he goes and does an old fashion psychological ghost story. Wasn\'t expecting that.

1408 is the definition of a Stephen King story. It has a writer protagonist, a past family tragedy and the creepy use of a benign 70\'s pop hit. I\'m surprised it doesn\'t take place in Maine also. The movie has become a surprise horror hit of the summer, catching people off guard in a time of retro-seventies/eighties shock gore horror pastiches.

Likewise, this score is a delightful surprise. This is another type of musical pastiche opposed to the current horror trends of atonal musical stings and general noisiness (I can\'t make myself sound more like an old man if I tried). From the very opening Bernard Herrmann-esque horn drone of "10 Haunted Hotels", the score announces itself as an unrepentantly old-fashion score with old fashion scares. In "The Dolphin Hotel", the score delights in haunted violin solos with plucking harp and mandolin strings. This theme weaves its nervous string rhythms subtly through many tracks. They indicate the intelligence and deep emotional problems of the John Cusack character. The whole thing suggests we\'re about to have a good creepy time.

Then about two minutes into "Room 1408", Gariel Yared pull his first surprise. The insidious alarm clock starts up. You know it is evil because it only plays The Carpenter\'s "We\'ve Only Just Begun" (a song that would have been great to have on the album, but it is omitted I suspect due to a rights issue). The soundtrack pulses with an electronic rhythm that wouldn\'t be out of place in a Clint Mansell or a David Julyan score. Yared weaves the motif of time through out of the score with the clicking of a watch pops up indicating the limited time Mike Enslin (John Cusack) has left before the room does him in.

Yared has clearly learned a few new things from his collaboration with Underworld on Breaking and Entering. As we know, horror is about scaring us. The question of how to scare us is in what tricks to use. Yared has opened his bag up and he incorporates elements of electronica into traditional horror movie scoring. Sometimes he will go completely strings ("Mike\'s Fugue") or he\'ll pile up a whole series of distorted, creaking and warped sound effects ("Bleeding Walls") like Akira Yamaoko\'s work on the Silent Hill videogames. Yared changes the style enough that you never know what to expect and the results are a nice creeping ambience with some good jolts.

What makes this score work better than most is that the disparate elements are all organically integrated.  Yared will always make sure there are some traditional elements mixed in the atonal elements. He also uses his old character drama strengths in the somber piano theme "Katie\'s Theme" which repeats in "Don\'t You Love Me Anymore?". Then when it is time to let it rip ("Ship in a Painting" and "Fire!"), Yared unleashes a full orchestral fury. He reserves the big scares for the strings ("Out on a Ledge") and then bring the electronic elements back in for the following build up to the next scare.

This is easily one of the most well-rounded horror scores I\'ve heard in… I don\'t even remember when. The whole soundtrack plays to Yared\'s old strengths and reveals exciting new talents as well. It also benefits from being one of those horror scores that works both inside and outside of the film. However, I can\'t wait to finish this review because I\'ve been listening to the album while writing and frankly this music is creeping me the **** out.