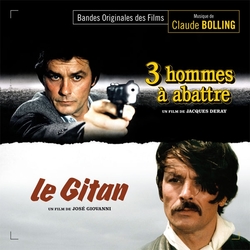 In collaboration with Gruppo Sugar and Musiques & Solutions, Music Box Records is pleased to present on the same CD the expanded original motion picture soundtracks composed and conducted by Claude Bolling. Alain Delon starred in and co-produced the two films: Le Gitan (The Gypsy, 1975) and 3 hommes ŕ abattre (Three Men to Kill, 1980).

For 3 hommes ŕ abattre directed by his long-time collaborator Jacques Deray, Claude Bolling composed one of his most ambitious works in cinema. For this modern urban thriller, he wrote a neo-classical score with serious and aching lyricism. A feeling of unease and threat dominates the score, which still allows for a few sentimental moments associated with the lead female character.

For Le Gitan, French director José Giovanni wanted a theme inspired by Django Reinhardt. He met the young composer Lick on the shooting of his film and asked him to compose the heart-breaking song (O Sinto). Alain Delon, who was co-editor of the film's music, asked Claude Bolling to supervise the recording of the song and compose the second theme (Cousin Django).

This present edition has been fully remastered from the session tapes and includes an 8-page booklet with liner notes by Gilles Loison, discussing the films and the scores.