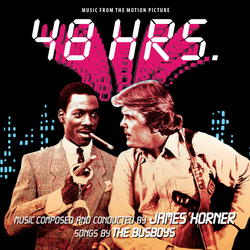 To coincide with the premiere release of the expanded James Horner score for Another 48 Hrs., Intrada presents a reissue of its earlier release to Horner's score to 48 Hrs. The soundtrack to the 1982 Paramount film featured one of Horner's most sought-after works until it was premiered by Intrada in 2011. Although the film is sparingly spotted, when Horner does enter the fray it is with broad, bold strokes that anchor the action and emotions—especially for the unquiet atmosphere of the mean streets and back alleys of San Francisco. While Horner uses a large orchestra, complemented by extra percussion and keyboards, he does not use trumpets and French horns, leaving only trombones and tuba to carry the weight of the brass. In addition, he keeps them in their lower registers and has them almost exclusively playing in unison or octaves. The resulting low brass timbre is thick, dark-edged and punchy throughout. It's an eclectic ensemble—a progressive fusion of funk-tinged jazz and orchestral elements. The many-layered theme, as first heard in "Main Title," immediately lays down a gritty urban tone using bass guitar and scattered percussion, with subtle accents provided by piano, harmonica and electronics.

James Horner contributed just under a half hour of orchestral scoring. The other primary musical ingredient in the picture was a quartet of original songs performed by The BusBoys. For their work on 48 Hrs., James Horner and The BusBoys jointly won the "Best Music/Score" award from the Los Angeles Film Critics Association. It is therefore fitting that the songs appear alongside the score on this release. For this new release, Intrada rebuilt the program using newly transferred high-resolution elements from Paramount, discovering one extra track and a few alternates along the way. This new master punches up the detail of the recording and allows for more prominence of the signature sax sound. One note—the track "The Walden Hotel" on the original release repeated an insert recorded for the cue. For this release that duplication has been removed and astute listeners may note the track runs slightly shorter due to its appropriate omission.