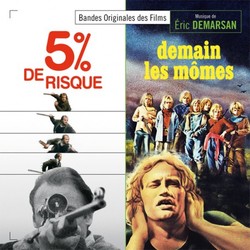 For Demain les mômes, Éric Demarsan uses synthesizers and electronic effects which are perfectly suited to the post-apocalyptic atmosphere of the film. Two themes dominate the score: Philippe's theme and the kids' theme. The first one (Thčme de Philippe) is played on the piano with reverb effects. Doubled with strings (Demain les mômes) and completed with the intervention of a harmonica, this piece gives a certain Western-like quality to some of the scenes. With very few dialogues, the film leaves a lot of room for the music to express iself.

For 5% de risque, the score is based on two themes. The first one, which can be heard as early as the opening credits (Générique début), is built on five notes inscribed in a bitonality that creates a climate of strangeness and unease. The tracks La trace and Le chasseur develop the second motif, characterized by chords suites favouring unpredictability in the harmonic progression.

The two scores have been fully mastered and expanded from the scoring session elements. The package includes an 8-page booklet featuring exclusive liner notes by writer Sylvain Pfeffer and new comments by Éric Demarsan on his collaboration with Jean Pourtalé.