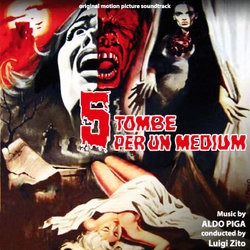 Digitmovies presents for the first time on CD the complete OSTs composed by Aldo Piga for the films 5 tombe per un medium (Terror-Creatures from the Grave), a Gothic horror film shot in 1966, and Il mostro dell'opera (The Vampire of the Opera), an Italian horror movie filmed in 1964.

For our CD (TT 73:14) we used the mono master tapes of the original recording sessions. Aldo Piga has written two symphonic scores that give a wink to those of the British Hammer studios and of Corman's American AIP productions with a wild performance of the orchestra which creates the background for the scenes of pure terror, alternated with moments of mystery. Both OSTs feature a main theme with ancient, almost Celtic flavour.

In the film 5 tombe per un medium you can hear a version of this theme performed by a little girl, but on the master tapes only a vocal which is sung both in Italian and English by an adult female exists. Piga reprises this charming theme with bass in a dance floor manner in the "End Titles" and its alternate versions as bonus tracks, backing tracks maybe purposed for a song on a record which then never saw the light of day.

For Il mostro dell'opera the author has used the musical saw and the Theremin, typical sounds of horror movies of the past, to describe scenes of tension and fear, alternated with nightclub dance floor tunes. For a bonus track we include a rare and fascinating take in stereo performed by the Theremin.