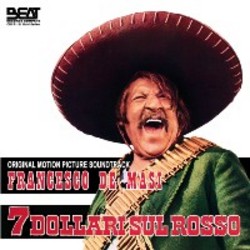 9th meeting with our series dedicated to western scores composed by Francesco de Masi, the popular Roman composer, one of the most prolific in that kind of soundtracks. 7 dollari sul rosso is maybe in the Olympus of the personal discography of the Maestro. In this soundtrack all the skill and the inspiration of the artist and his collaborators, Alessandro Alessandroni and his Cantori Moderni, Franco De Gemini with his harmonica and in this score the trumpet played by Michele Lacerenza (A Fistful Of Dollars), too. The CD is released with the original LP selection and 13 never released before tracks for a running time of more than 60 minutes. Jewelbox edition featuring an 8 page booklet, master by Claudio Fuiano, artwork by Daniele De Gemini and liner notes by Filippo de Masi. You can't miss it!