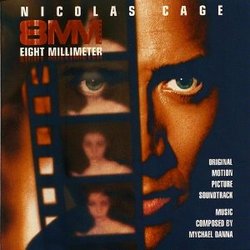 Danna's score takes a very unique approach to the material on the screen. I can't seem to figure out why, but this is a score with a huge Moroccan influence. Utilizing the traditional woodwind instruments of the area, and a lot of vocal talent, this score feels unlike anything one would expect for a dark movie like 8MM. Interestingly enough, however, it works amazingly well in the film. The use of traditional-sounding themes combined with occasional synth elements, and plenty of atmosphere culminate in a very unique audio experience. This score works well on its own, as well as in the film (a double bonus)!

The first track ("The Projector") has some background hisses and pops, which creates the effect of a film projector running in the background as the main theme plays out. Track 8 ("Hollywood") stands out as a prime example of this Moroccan flare. The dissonance in the woodwinds and the vocal "shouting" almost places one in the midst of a bazaar. Track 18 ("Rainstorm") underscores the climactic fight at the end of the film - the percussion and slowly building thematic loop engrosses the listener and heightens the tension in the scene.

The score to 8MM runs almost 50 minutes long, and is an engrossing and unique score to listen to. Compass III Records, who released the album, is certainly on a winning streak of quality releases, with The Avengers and A Simple Plan already under their belt. With the expectation of an expanded Tomorrow Never Dies later this year, there will be great things to come from this fledgling record label.