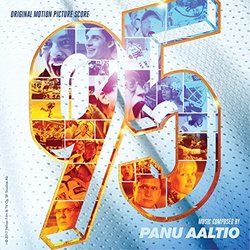 Directed by Aleksi Mäkelä, 95 tells the story of the 1995 Ice Hockey World Championship. Hosted in neighbouring Sweden, the Finnish national team had to go the extra mile in order to win its first ever championship, beating the Swedish team 4 to 1. The movie tells the ups and downs of the historical weekend of May 1995 – a date that no Finnish hockey fan can ever forget.

The thematically rich score starts its powerhouse performance with "Training" which is about the team effort, and it's used to drive the character development of the players while "A Common Destiny" plays the ensemble theme that we use to tie together all these different dramatic stories. The composer has some comedic fun in 'The Royal Castle and the Three Goons', a theme for three guys who are so sure that Finland will lose that they travel to Sweden to act like idiots instead of watching the match.

The eight-page booklet features liner notes by Gergely Hubai with quotes from Panu Aaltio himself, discussing the score.