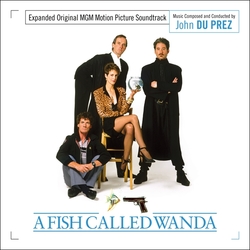 With the participation of composer John Du Prez, Music Box Records presents for the first time the complete score to A Fish Called Wanda, newly re-mixed and carefully remastered from multi-track session tapes.

The soundtrack was issued on LP and CD in 1988, it included 42 minutes of music organized into 21 tracks. The current release adds about 31 minutes of brand new material organized into 47 tracks. This Music Box release also features several previously unreleased tracks (alternates, unused cues and demos) and two unused versions of Wanda's love song, one performed by Rick Driscoll and the other written and performed by John Cleese.