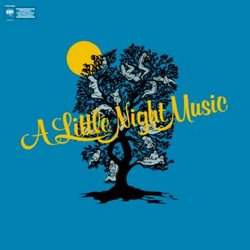 Masterworks Broadway continues to explore the rich history of its unrivaled cast recording and film soundtrack catalogs with the release of A Little Night Music—previously unavailable on CD.

The soundtrack of the 1978 movie version of Stephen Sondheim's Broadway masterpiece, A Little Night Music finally finds its way to CD. Directed by Hal Prince, the all-star cast features Elizabeth Taylor, who sings the famous "Send in the Clowns," Diana Rigg, Lesley-Ann Down, Len Cariou and Hermione Gingold.

This newly-remastered CD is transferred from the original stereo masters, and includes a previously unreleased instrumental cue, along with two other instrumental cues taken from the mono soundtrack of the film. The complete version of "Every Day a Little Death" is also included from the mono soundtrack, as the carriage ride verse written for the film was not included on the stereo master. Featuring liner notes by Sondheim archivist Peter E. Jones.