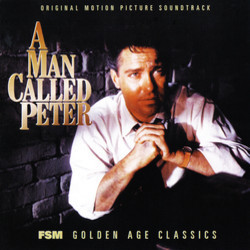 It took me about ten years of score collecting before I extracted my head from my rear and began cultivating a healthy appreciation for the music of Hollywood's Golden Age and masters like Alfred Newman. For me, film scores had magically begun with the ones I heard when I was young and anything before that was archaic and syrupy wallpaper. Boy, was I ever wrong. As I have dived headfirst into Golden Age music as of late, I am delighted to report that FSM's release of Newman's A Man Called Peter is stunning evidence of my previous shortsightedness.

To borrow from an old cliché, they really don't make 'em like this much anymore. The score and its many source cues were written and arranged for a 1950's biopic of Peter Marshall, a Scottish immigrant who became Chaplain to the U.S. Senate. A Man Called Peter features, among many other plusses, an absolutely knockout main theme, awash in Scottish folk influences, with such a delicate sense of the dramatic and the stately it is hard not be won over. Newman's strings really soar like no others. He was one of the best, and this handsomely produced and great-sounding CD is a little piece of the overwhelming proof.

You say you want more memorable themes? Well, Al's got 'em. In addition to the aforementioned Peter's theme, there are memorable motifs both for his wife (easy there, Christian soldiers, he was a Protestant) and for his spiritual work. What blows me away time and again about the themes for Peter is how they are each at-once so distinctive, yet melodically woven so closely together they seem at times to be variations on each other. The overall effect is music that is completely of-a-piece, but never once boring. Disc highlights include, but are surely not limited to, tracks like "The Revelation", "Goodnight Peter Darling", "Hospital Scene" (featuring a sparkling lullaby motif), and the somber but lovely "Soliloquy".

As this is the complete score for the picture, there are also plenty of  "church music" source cues on display here, sequenced as they appear in the movie, taking up what I would guess to be a little under half the disc's hour long running time. There's a handful of church organ, a little congregational choral work, and even some solo work from the principal characters. At worst, they are pleasant distractions from Newman's material. At best, they are a fundamental part of the musical world of the movie.

The album's chronological sequencing can be viewed as either a plus or a minus. Fans of the film itself and those looking to perfectly recreate its musical experience should be delighted. Those looking to hear Newman's own specific musical contributions may find themselves reaching for the skip button more than once. As a whole, though, FSM did the right thing here. The source cues are too tightly woven into the fabric of the film and story, even into specific cues such as the lengthy and gorgeous "The Proposal / The Cedars Waltz / The Way Of Love", which goes from straight underscore to source and back again without skipping a beat. To extricate Newman's material would have been jarring, if not altogether impossible.

This is a great one, folks. Even for today's collectors weaned on Media Ventures' synthesized aggression, this is fantastically accessible music from one of our best composers, with deluxe packaging including many color photos as well as Lukas Kendall's informative liner notes and spot-on track analyses. Get it before they are gone.