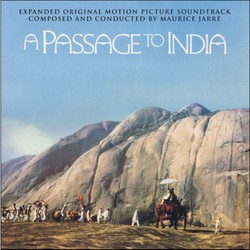 A Passage to India - Expanded

Jarre's score is based primarily on two themes, including one that on the surface is nothing more than a pop-styled foxtrot. The composer develops this material at greater length on the album than in the movie (which contains only about 20 minutes of music)—demonstrating a level of sophistication and artistry in keeping with the multi-layered nuances of Lean's film.

The album has been expanded by about 20 minutes from the original Capitol release. It features the complete score that Jarre prepared for the film, including many cues that were not used in the final cut (such as the music Jarre composed and recorded for the Marabar Caves sequence), as well as an alternate main title and a lot of exotic Indian music composed by Jarre in the same style as The Man Who Would Be King.

Powerfully performed by the Royal Philharmonic Orchestra under the composer's baton, this release has been fully remixed and mastered from the original 24-track session tapes by Gareth Williams, and we can say that it has never sounded better. Produced by James Fitzpatrick from Tadlow Music for Quartet Records, the package includes a 20-page booklet with liner notes by Frank K. DeWald and James Fitzpatrick.