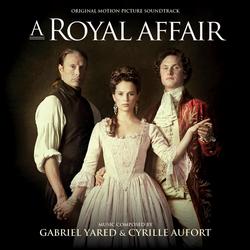 Described as a 'major asset' of the film by The Hollywood Reporter, the "full-bodied score" by Gabriel Yared and Cyrille Aufort for Nikolaj Arcel's Danish costume drama A Royal Affair will be released on CD by MovieScore Media in time for the film's release in major territories such as the UK and Australia.

The beautiful, classical-sounding orchestral score is a romantic and thematic work permeated by a sense of forbidden passion throughout. The pairing of highly experienced composer Gabriel Yared (an Oscar winner for The English Patient in 1997 and the author of over 70 feature film scores including Cold Mountain, The Talented Mr. Ripley and Betty Blue) and newcomer Cyrille Aufort (who worked as an orchestrator for Oscar-winning composer Alexandre Desplat and got his impressive feature film scoring breakthrough with Splice in 2009) is a great one where the result is an engaging, sophisticated and handsome score that fits the film perfectly and works beautifully as a stand-alone listening experience.