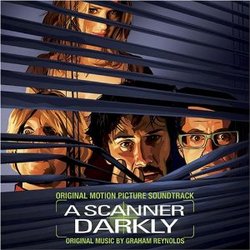 Performed by
The Golden Arm Trio

A few years ago, I was completely smitten by Richard Linklater\'s Waking Life. I adore animation; in fact, one of my chief pleasures this summer has been the discovery of Max Fleisher\'s stunningly animated Superman shorts from the early 1940s. So, the fact that Waking Life had little plot and was excessively talky was of little consequence – the animation itself held me enthralled. For that movie, Linklater updated a technique called rotoscoping, in which animators trace live-action footage and then redraw it. Fleisher actually invented the technique and used it in those Superman cartoons; even Walt Disney employed the procedure in Snow White and the Seven Dwarves. Linklater simply made something old new again by shooting Waking Life with a digital camera and then having his team of animators transform the footage in the computer.

Linklater has returned to the art form with A Scanner Darkly, quite possibly the truest representation of author Philip K. Dick\'s works ever brought to the screen. Dick\'s works abound with paranoia and uncertainty about identity, and the result of the rotoscoped animation is a trippy world where anything can happen. And since the process takes over a year to complete after principal photography, it is perfect for a fully developed score as well.

Because of the time available to write the score, Linklater was able to tap the untested Graham Reynolds, an Austin-based composer/performer whose eclectic jazz/rock/symphonic fusion music has graced a few independent films, but never a Hollywood feature. As you might guess from my description, Reynolds\'s music is hard to classify, but that is a strength in this case. His unconventional use of instruments and strange blending of musical styles fits A Scanner Darkly perfectly. With a year to craft the score, Reynolds succeeded in forming a sound that mirrors the movie\'s confusion and other-worldliness.

What most intrigues me about the score is the fact that every sound you hear was created by an acoustic instrument. Reynolds often altered the sounds electronically, but these are not samples from a computer, they come from flesh and blood performers. Using this process is more time-consuming, but it gives a tactile, emotional resonance often missing in contemporary scoring. These sounds are then blended in startling ways. Here are just a few of the unusual sounds that await you on this score: "7 Years From Now" opens the score with a bed of unidentifiable sounds over which a mournful viola plays; "Aphids" follows this bleak opening with a driving percussion riff under guitars, altered strings, and what sounds like a Theremin; "A Scanner Darkly" is full of sustained vibraphone, pulsating string chords, and solo strings, much like a standard Hollywood score; "Abrasocaine" has percussion and distorted guitar work that could have come straight out of the mid-90s grunge rock style. All told, it is a remarkable collection of sounds, almost like walking through a musical museum.

Unfortunately what works so well onscreen can often sound disjointed when separated from the visual images. With a year to construct the score, you would expect more unity in the score. Certainly there are thematic elements that come back – the delightfully honky-tonk melody from "Strawberry Pie" is transformed into a disjointed vibraphone solo in "Do You Like Cats" and the mournful melody from the score\'s opening pops up in the same instruments, but not the same orchestration, throughout the album. But overall, this score is a series of quick cuts from style to style. It jives perfectly with the film, but not sustained listening.

Does this mean I can\'t recommend the score? Absolutely not. A Scanner Darkly has some of the most interesting and provocative writing I\'ve heard in quite a while. It reminds me of last year\'s Mirrormask in its freewheeling joy of musical exploration. It provides hours of sounds to digest and discuss. And it certainly makes me want to see where Graham Reynolds goes next.