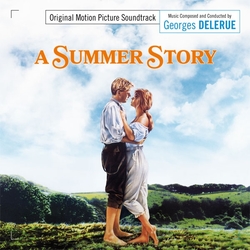 
Music Box Records is proud to present the expanded CD edition of the romantic masterpiece, A Summer Story. While the music by Georges Delerue is thematically rich, like most the composer's scores, the key to appreciating the delicacy and brilliance of A Summer Story is to look at the score as a clash between different sections of orchestra, specifically the strings and the woodwinds. The sections of the orchestra represent different social classes - as the story progresses, the two worlds start to intertwine together in enchanting ways - the most beautiful passages of the developing romance utilize both the strings and the selected woodwinds (flutes in particular). The film is also notable for featuring Delerue's adaptation of an Irish folk song entitled The Gentle Maiden - this CD marks the debut release of the cue's film version.