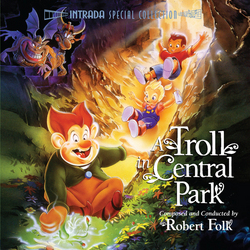 A Troll In Central Park

Complete score presented from crisp two-track digital session masters. (Three songs were permanently wedded to sound effects and dialog of picture and, as such, are not included on this album). But the score's the thing! Robert Folk conducts Irish Film Orchestras (the collective name given members of several Irish ensembles).