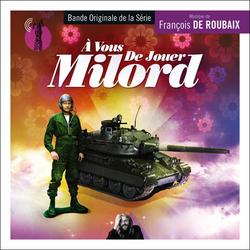 Once again Music Box Records pays tribute to Francois de Roubaix with the original television soundtrack composed for Christian-Jaque's mini-series A Vous De Jouer Milord (1974). This French spy story presented in comic book style was broadcasted on TV on November 1974. It tells the adventures of Hubert de Pomarec (Henri Piégay), alias "Milord", a retired spy called back into service to foil the abduction of the new army tank AMX 30 by a gang of crooks.

This complete CD edition offers more than one hour of unreleased music. Mixing pop and electronic tones, Francois de Roubaix wrote catchy tunes sustained by an orchestration as sophisticated and fresh as ever. He produced the entire music score in his personal home studio on the Rue de Courcelles and used an 8-track recorder for overdubbing. The EMS VCS3 synthesizer provided him a broad range of sounds, which he used in different combinations in his experimental lab.

Strongly appreciated by the electronic pop scene and even beyond the musical genres, Francois de Roubaix is one of the most eclectic French soundtrack composers who geniously experiments the music to the screen. After visiting the jazzy world of his very first soundtracks (Comment les Séduire, Les Strip-teaseuses and Les Combinards), Music Box Records takes you to the amazing electronic world of François de Roubaix. A Vous De Jouer Milord here receives its definitive presentation, featuring additional material and including the song of the closing credits performed by Martin Circus.

Gilles Loison wrote the liner notes for this brand new album. Fascinated by television and cinema since his childhood, Gilles Loison developed very early on an interest in film music. He then discovered the unusual talent of Francois de Roubaix, at the very moment of his fatal disappearance.