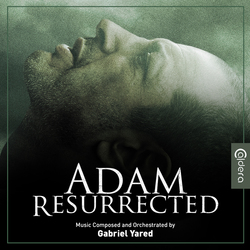 Caldera Records is proud to present the original score for the motion picture Adam Resurrected from 2008, directed by Paul Schrader and starring Jeff Goldblum, Willem Dafoe and Derek Jacobi. The music was written by Gabriel Yared who delivered one of his most unusual and daring works and also one of his most satisfying. Yared, who won an Oscar for his work on The English Patient, wrote the score for an orchestra but later abandoned the idea to create a score which wouldn't make the film into a schmaltzy melodrama. Instead, the composer used a solo piano, solo violin, solo guitar and solo cello to come up with the right tone for the film. These instruments are accompanied by electronic textures, bringing back memories of Yared's earliest scores from the 80s which are developed further here. The French-Libanese musician melts the sorrowful main theme of the film, beautifully played by Bogdan Vacarescu, with sometimes harrowing and sensual electronic counterpoints, fusing score and source music and thus delivering one of his most original and complex works which is deeply touching even outside the film. The music was recorded at Abbey Road in London and is now available for the first time on CD. The 18th CD-release of Caldera Records features a detailed booklet-text by Gergely Hubai and elegant artwork by Luis Miguel Rojas. The CD was produced by Stephan Eicke and John Elborg.