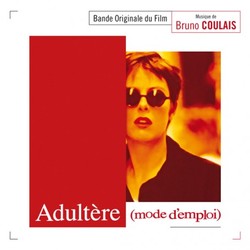 Adultčre (mode d'emploi) was the third collaboration between director-actress Christine Pascal and composer Bruno Coulais. The film is about the sentimental mishaps of a couple of promising young architects: Bruno (Vincent Cassel) and Fabienne (Karine Viard). As usual, Bruno Coulais gives a particular musical identity to the film. Dominated by the voice of the mezzo soprano Marie Kobayashi, the main theme, built on an ostinato, intrudes on Bruno and Fabienne's life, hopping from one note to the next according to the rhythm of their sentimental or sexual adventures.

The score of Adultčre (mode d'emploi) is typical of Bruno Coulais's style, which gives a central place to singing voices. It brings to light all the art of this composer, who knows how to adapt to the topic of a film, yet always retains his freedom and the singularity of a very personal musical universe. The 8-page booklet features an essay by Sylvain Pfeffer discussing the film and the score.