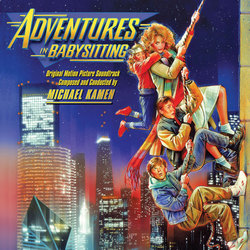 Composer Michael Kamen's score for the 1987 Touchstone Pictures film Adventures in Babysitting is a bit deceptive on screen—during postproduction, several cues were dropped and many others truncated, reducing the amount of score in the finished film by a significant amount. In actuality, it is a substantial work running roughly 70 minutes—with sessions for large orchestra held in both New York and Los Angeles.

The score proper favors compact motivic gestures over drawn-out melodies. Its principal idea is a short theme associated with the heroine Chris (Elizabeth Shue), highlighting a falling-and-rising motif, while other recurring ideas include a breezy, pop-inflected line, a brassy flourish inspired by the mighty Thor, and a collection of motifs used to highlight moments of excitement, danger and distress.

This premiere release of the score features all of the cues Kamen recorded for the picture in their original full-length versions, plus a wealth of never-before-heard music. Four songs important to the soundtrack appear as well, including the famous hit "Then He Kissed Me" and the show-stopping "Babysitting Blues," in which the cast members attempting to elude their dangerous pursuers suddenly find themselves smack in the middle of a blues concert—on center stage no less. The orchestral sessions were recorded on 2″ 24-track tape and preserved in that format in pristine condition in the Walt Disney vaults.