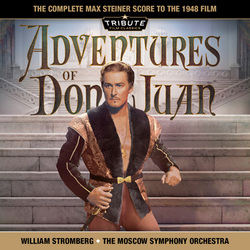 Max Steiner's Adventures of Don Juan is one of the all-time great Golden Age film scores and finally bursts onto CD with every note intact for the first time from Tribute Film Classics.

Steiner packs the film with musical colorings that run the gamut from rousing action themes to glorious processionals to lilting love themes and serenades. The infectious Don Juan theme itself is one of Steiner's most recognizable and he brilliantly exhausts every possible variation of it to keep the score fresh and cohesive. The award-winning Tribute team of William T. Stromberg, John Morgan and Anna Bonn have meticulously recreated every note for this first-ever presentation of the complete score. As with all previous Tribute recordings, Stromberg conducts the Moscow Symphony Orchestra in a flawless performance that will astound all lovers of classic film music.

Also included in the set is the complete score for Frank Capra's popular comedy Arsenic and Old Lace (1944) starring Cary Grant. Here, Steiner cleverly uses numerous existing melodies to complement the tale of two kindly spinster sisters who just happen to have a penchant for poisoning lonely old men. A delightful 18th century children's hymn is used for the main thematic material, but Steiner also creates a wonderful, fairy-like theme for one of the crazy spinsters and provides his usual abundance of expressive motifs.

Rounding out the set are bonus tracks that include Steiner's great trailer re-orchestrations for both films, and an amazing surprise track that will thrill all fans of the great composer.

A 68-page, full-color booklet is spectacularly designed by Jim Titus and features notes from the Tribute principals along with Steiner archivist James V. D'Arc. The booklet is jam-packed with photos and includes extensive production histories of the two films by historian Ryan Brennan and cue-by-cue analyses by Curt Hardaway.