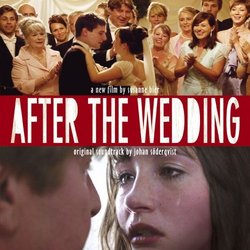 After the Wedding has been nominated for Best Foreign Language Picture at the 79th Annual Academy Awards. Composer Johan Söderqvist has received two awards himself in Cannes for his original score for Brothers, and a nomination for Best European Composer 2005 at the European Film Awards, as well as the Swedish Grammy Award in 1991. Söderqvist's music for After the Wedding captures the emotion and unpredictability of the film. His music accompanies the picture perfectly while also leaving room for the film to breathe.

Review: After the Wedding

Johan Söderqvist's score to After the Wedding made me think. Did I like it simply because it uses non-Western instruments? Here I am, giving high marks and praises to Water, The Namesake, Zozo, and Nomad: the Warrior. Is it only because I've grown accustomed to the sound of the Western orchestra or are these scores genuine gems? I'll stop here before I bore you with a neurotic monologue; suffice it to say, I do believe these scores are actually good and engaging regardless of the instruments, but how can I tell for sure?

After the Wedding explores the sounds of India and does it remarkably well, but it is also much more than that. Imagine putting The Namesake, The Sweet Hereafter, The Sisters, and David Julyan's career in a blender and tasting what comes out. This is After the Wedding. It makes for a compelling album that is mostly understated and minimal, well crafted and introspective, where hesitant string harmonies make way for synthesized ambience in one track, while intense percussion and a metallic santoor barge in in another.

After the Wedding is a Danish film by Susanne Bier with Mads Mikkelsen in the title role of Jacob. American audiences who do get to see the film might recognize Mikkelsen as Le Chiffre in the latest version of Casino Royale. Jacob is from Denmark but he has spent his life dedicated to an orphanage in India. A powerful Danish businessman makes him a proposition: he will donate a huge sum of money to the orphanage if Jacob agrees to participate in said businessman's daughter's wedding.

An energetic and catchy Indian song bookends the album: in "Manchali", it is sung by a female soloist, while in "After the Wedding", it is a men's choral group that takes it over. Both versions feature the same driving rhythm for drums and santoor and a memorable violin melody, full of Indian glissandi. The South Asian elements only make their first overt score appearance in "The Journey", but they return a few times afterwards, notably in the first two "Memory Lane" cues. "Memory Lane 1" reprises the theme of "The Journey" in syncopated fragments for the bansuri, complemented by piano chords. A few other cues, such as "Jorgen Is Afraid", seem to use the ney flute, which fans of art house cinema might have heard before in The Sweet Hereafter as the musical voice of the piper. Its moody and raspy sound colors a track like "Memory Lane 2" with dread and a sense of loss.

"The Verdict" is perhaps the best example of Söderqvist's fine use of synthesizers to craft a permeating atmosphere of dreamy uneasiness. This artificial backdrop covers most of the tracks, with a string ensemble or an Indian instrument laid on top and proceeding in cautious steps. Silence plays the same role here as it did in Thomas Morse's The Sisters: it allows the drama to breathe. The music never chokes us; it's like the tide, coming and receding.

After the Wedding is mainly a minimal score, albeit not in its full instrumentation. Söderqvist utilizes the santoor, the ney, the bansuri, and other traditional South Asian instruments, as well as a string ensemble, a piano, and an array of synthesizers. Each cue never features more than three of these instruments, making for a minimal listen that never gets repetitive. The bookending song is a strong point of the album but the score itself, while never flashy, is refined and filtered down to its core elements. After the Wedding is a moody and intriguing album that should satisfy fans of eclecticism and minimalism.