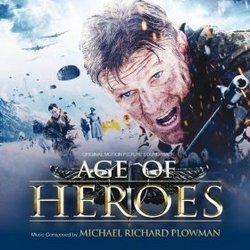 Performed by
The Hungarian Studio Orchestra

Based on the true story of the formation of the British 30 Commando, one of the most respected, secretive and exclusive special forces regiments formed during WW2, Age of Heroes is an action-packed film that boosts a truly exciting and heroic orchestral score by the talented Michael Richard Plowman.

Recorded in Budapest, the score combines an old-fashioned melodic approach (grandiose themes for strings, brass and percussion) with adrenaline-driven action scoring. "The team was looking for a big heroic thematic score," the composer said. "We wanted a modern war movie. The melodic strength of the great old war movies, but the aggressive, percussive and thick orchestration of today's film scoring sound." That is exactly what Plowman delivered, and this is an impressive debut soundtrack CD that will appeal to all fans of great action music.