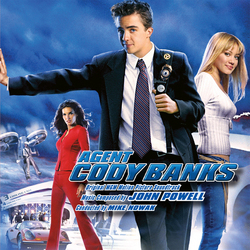 The 2003 MGM film Agent Cody Banks features composer John Powell at the musical helm of this CIA-trained high school secret agent with the cool bravado of a super spy and the angst of a teen boy who was trained to fight but not to talk to a girl.

No stranger to the world of intrigue, the composer who adorned the Bourne films with rhythmic action created a score capturing Cody's blend of assured physical moves and absolute verbal awkwardness. It required a musical personality that resonated from a stalwart hero theme to punchy jazz riffs, gripping doomsday-countdown suspense and a lushly assured melody for the fashionably sinister ERIS. Agent Cody Banks is far more than a retro Bond pastiche however, especially when it comes to playing a character caught between the CIA and civilian worlds, and a gawky-looking kid who isn't nearly the ladykiller he's cracked up to be. Subsequently, Powell mirrors every "serious" theme with a humorous counterpart, thus reflecting the two sides of Cody Banks. His teen-awkward "hero" melody is propelled by a finger-snapping groove.

At the time of the film's release, a CD sported just two score cuts amongst a barrage of vocals. Some twelve years later, Intrada unleashes a CD packed-to-the-limits of playing time featuring the complete score.