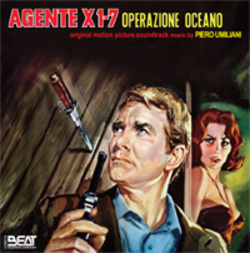 With Agente X1-7 operazione oceano (1966) we return to the Italian Spy genre. Among the many scores composed by Piero Umiliani, it's surely ranked among the top. It's a real masterpiece and a particularly inspired moment for the composer, who incorporated all of the sounds typically associated with the genre. For lovers of Euro-spy scores it's an absolute must, and for everyone else a precious addition to your soundtrack collection.

The CD is packaged in a jewel case with a 12-page booklet, with liner notes and mastering by Claudio Fuiano and graphic layout by Alessio Iannuzzi. Limited edition of 500 copies!