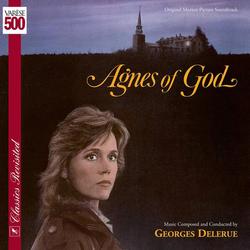 Performed by
The Toronto Symphony Orchestra

We are so excited to launch our new Varčse 500 series by bringing back Georges Deleruep's gorgeous, spiritual, powerful, moving, and Academy Award-nominated score for Norman Jewison's 1985 film Agnes of God. It's hard to believe that it has been almost 25 years since our last CD reissue of this score, way back in May of 1992. It was a sad time then. We had just lost the legendary French composer two months earlier, on March 20. For this new edition of the score we remastered the album to address a few tone anomalies, along with a few room noises, while we were at it. We have added new liner notes, in addition to retaining the 1992 notes. Another change is that, for the first time ever, we have applied some of the actual track titles to the cues, where originally they were all simply listed as movements of a "Symphonic Suite for Chorus and Orchestra." The CD actually contains more music than is in the film, with a number of cues, and portions of cues, that were not included in the final cut, so it wasn't possible to be completely accurate with this, but the album does finally have track titles.