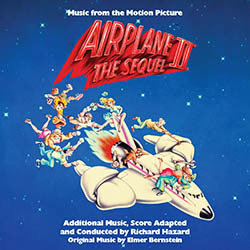 Composer Richard Hazard expertly adapts Elmer Bernstein's iconic Airplane! score, while also providing his own exciting original music to help launch this sequel's doomed airliner and its nutty cast of characters into the cosmos! Produced by Dan Goldwasser and mastered by James Nelson from an analog-to-digital transfer and new stereo mix by John Davis, this special release is limited to 1500 units and features exclusive, in-depth liner notes by writer Brian Satterwhite and high-flying art design by Goldwasser.