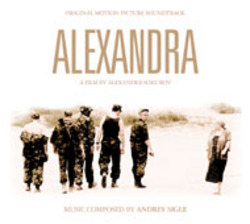 Performed by
Orchestra of the Mariinsky Theatre

The film, which was nominated to the 2007 Golden Palm at the Cannes Film Festival, tells the story about an elderly woman who visits her grandson at his army camp inside Chechnya. Sigle's orchestral score is both intimate and grand, filled with evocative themes and warm and passionate orchestrations. Cinema Without Border's wrote that the music is "ever evocative and never intrusive, beautiful in its own right" and "haunts with an indelible impression."