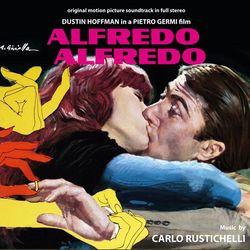 Digitmovies is pleased to release the complete edition OST, by Carlo Rustichelli, for the film Alfredo, Alfredo.

At the time, CAM had released an LP in Italy (CAM SAG 9044) and in Japan (Seven Seas FML 104) with 20 tracks for a total of 30 min. and 44 sec. Then in 1993 it was released for the first time on CD (CSE 107) with extra tracks (39:28 min. total), but with the sound filtered in Dolby Surround (something not appreciated by collectors). For our CD (51:54 minutes) we used the stereo master tapes from the original album (without Dolby) and we discovered around 21 extra minutes of material.