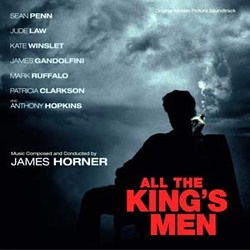 All the King's Men

Review: All the King\'s Men

It seems that there will always be controversy surrounding James Horner\'s music. From accusations of self-plagiarism, to direct quotes of classical pieces, there will always be people on one side tearing the man down for his music. On the other side, there will be his steadfast supporters and fans, who will insist that it doesn\'t matter if that cue sounds familiar, if it works in the film then it\'s served it\'s purpose. I\'ve found that Horner\'s best works come from the projects in which he is challenged. Last year\'s The Chumscrubber (which was on SoundtrackNet\'s Best of 2005) forced Horner to come up with a score with a limited budget. The result was a rather unique effort, filled with synth elements and a small ensemble. Now we have his latest film, All the King\'s Men. Directed by Steven Zaillian (Searching for Bobby Fischer) and based on the 1947 Pulitzer Prize-winning novel, the film focuses on the rise (and fall) of populists politician Willie Stark (Sean Penn).

Zaillian\'s needs for the score challenged Horner to come up with strong thematic material, without sounding like something he\'s done before. The result was a solid main theme, with other melodies representing the themes of power and corruption that flow through the film. A secondary plotline involving ex-reporter Jack Burden (Jude Law) and his unconsummated childhood love (Kate Winslet) provides inspiration for a rather melancholy and achingly beautiful love theme. Even the most strident Horner critic will be hard-pressed to feel unmoved by Horner\'s efforts.

The "Main Title" introduces us to the Power Theme, strong in the brass, and interweaved with the accelerated percussion builds, which are topped with Horner\'s trademarked chimes. This gives way to the Main Theme, played initially on the pianos (Horner used three of them in the score) with quiet strings backing them, before a stronger statement is heard with the full string section. The theme is melodic and has a dash of southern flavor to it. The track ends with four dark resolute chords, representing corruption and then the Power Theme once more. Much of the score plays off those three thematic ideas, with subtle variations in the orchestration. From the tender and intimate ("Adam\'s World", "Only Faded Pictures") to the rustic Americana ("The Rise to Power", "Bring Down the Lion and the Rest of the Jungle Will Quake in Fear") to the emotionally charged and powerful ("Verdict and Punishment", "Time Brings All Things to Light... I Trust It So"), the themes intertwine and play off each other.

As mentioned previously, there is the secondary plotline, which Horner represents through the Childhood Theme. Heartbreakingly tender, we first hear it in "Bring Down the Lion and the Rest of the Jungle Will Quake in Fear." Orchestrated primarily for piano (and occasionally woodwinds), the haunting melody will linger long after the album finishes playing. "Anne\'s Memories" and "Jack\'s Childhood" are two very solid tracks showcasing this theme, while "Love\'s Betrayal" and "As We Were Children Once" maintain the melancholy edge, with a bit of emotional energy. "All Our Lives Collide"is a soft track towards the end of the album that don\'t really use any of the themes, but provide the necessary underscore for the film, with an elegy in the strings and a sad conclusion.

Now we come to the anomaly. The one track that critics will point to and use as evidence of Horner\'s self-referential tendencies. But there is a catch. "Give Me the Hammer and I\'ll NAIL \'EM UP!" is a lengthy cue that orchestrationally feels like bits of Apollo 13, with rumbling piano interwoven with the Power Theme. Soon a new Americana melody is heard - never to be heard again - and as the orchestra builds to the climax, we hear a rather obvious statement of the "Sons of Scotland" melody from Braveheart. Sure it\'s good music, but it\'s terribly familiar. And would work well in the film, but that\'s where the anomaly lies. The album master for All the King\'s Men was locked prior to the pick-up scoring session in August - during which time, this very cue was replaced. In the film, we don\'t hear the Braveheart bit at all, so technically, it\'s never in the final score. It would be unfair to judge the overall score based on the soundtrack, when a replaced alternate cue is questionably sourced.

That being said, with the exception of that one moment on that one track, the rest of the soundtrack album is a solid listen. Horner\'s orchestration is distinctly his own, but it has such a classical style that it lends itself to the musical equivalent of comfort food. There is nothing groundbreaking about this score, but it is an exceptionally strong work by Horner. With strongly stated themes bubbling over with emotion, All the King\'s Men is easily one of the best albums of the year.