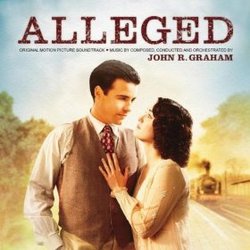 Composer John R. Graham, whose previous credits include the controversial action flick Bitch Slap and dramas such as American Strays, My Brother's War and The American Standards, has written an immensely beautiful, uplifting and romantic score for Alleged.

The film takes place in Dayton, Tennessee, in 1925 and tells the story of a talented young reporter who manages to insert himself into the middle of the "trial of the century". Stars include Nathan West, Colm Meaney and Brian Dennehy.

Composer John R. Graham says, "Although the score overall is not a period piece, I decided to use instrumentation and recording technique to anchor the music in time and place, and give it some correspondence with the local characters. We used period guitar—a 1920s dobro—and a banjo from the same time frame, along with fiddles, 'bones' and other instruments that were available in the 1920s. We used an old ribbon microphone in the recording process as well, to give greater authenticity." Despite using period instruments, Graham avoided writing period music. "Many people feel that the score should sound like something the characters themselves would listen to, and for some pictures that would be right. However, the filmmakers of Alleged wanted the film to feel very immediate, very current, while also setting very ambitious goals for themselves."

Our online release of the score co-incides with the US DVD release and features Graham's orchestral score that makes great use of various Americana elements. The more intimate parts of the score are for fiddles, guitar and banjo, while the broader writing is for strings.