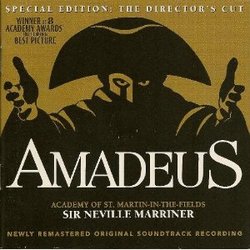 Performed by
Academy of St. Martin-in-the-Fields

18 years after it was first released, and swept the Academy Awards, Amadeus is still as powerful as ever.  Based on the play by Peter Schaffer, the story details composer Antonio Salieri's confession to a priest about how he is responsible for Wolfgang Amadeus Mozart's death.  Salieri (F. Murray Abraham) dedicated his live to God, and in return hoped to be blessed with the gift of music.  But when he meets Mozart (Tom Hulce) - a genius composer, and a giggling buffoon, he realizes that his devotion to God has been squandered.  Renouncing his faith, Salieri now makes it his mission to destroy Mozart.  Recently, Amadeus was re-released in theaters as a new Director's Cut - with an extra 30-minutes of footage.  Primarily rounding out the role of Mozart's wife, Constanze (Elizabeth Berridge), the extra footage also allowed new music to be included in the release.  To complement this re-issue of the film, Fantasy Jazz has put out a new 2-CD set, with 24-bit remastered sound, on 24-karat gold discs.

The soundtrack is primarily the same as the 2-disc set included in the Special Edition laserdisc box set a few years back (which mirrored the content of the 3-disc collector's soundtrack), with the exception of a few new cues.  The music is all classical in nature - the works of Mozart fill the album, and the Academy of St. Martin-in-the-Fields, conducted Sir Neville Marriner, sounds exceptional.  It is difficult to review such an album, because most of the music has been around for centuries - and nothing I can say will improve upon its value as good or bad.  That being said, however, there are a few tracks on here that stand out exceptionally.  Of course the opening, "Symphony No. 25 in G. minor" is brilliant in the film, underscoring Salieri's suicide attempt and his journey to the sanitarium.  "The Abduction from the Seraglio" is a fun piece, but I'm still a little upset that there are a few moments in the film not on the album.  What is on the album (and wasn't released before) however, is the section in the film where Mozart takes Salieri's March of Welcome and adapts it himself.  As this was all recorded on set, the audio comes directly from the film - complete with dialogue.  It's still an effective moment, though.

The second disc contains "The Marriage of Figaro", "Don Giovanni" and "The Magic Flute" - all of which are exceptionally performed, and delightful to listen to.  But all of that pales in comparison with the climax of the film, and my favorite work on the album: Mozart's "Reqiuem".  The way that the soft mournful "Introitus" is shattered by the "Dies Irae" is just brilliant - it was even replicated for the rather successful marketing campaign for Cliffhanger. "Confutatis", which is created on screen piece by piece in a brilliant sequence, is a powerful cue, and the final "Lacrimosa" is devastatingly sad.  The album is capped with Mozart's "Piano Concerto in D minor", a delightful way to end the film, as Salieri is wheeled away, absolving all the mediocrities in the world.

Now comes the tough part - should you buy this album?  If you have the older version of the album, and can live with it, you're probably better off doing so.  The music is great, certainly - and it's a wonderful album to listen to.  The quality is exceptional, the remastered recording sound great, and the booklet included is informative.  But, as a 24-karat gold CD, the price is expensive.  As a 2-CD set of 24k gold discs, it's even more expensive.  If it weren't for the high price tag, this album would be a "must have".