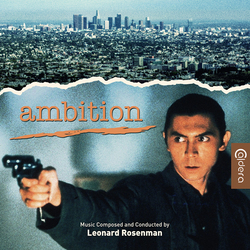 Caldera Records is proud to present the score for the motion picture Ambition from 1991, directed by Scott Goldstein, featuring music by Leonard Rosenman.

Actor and writer Lou Diamond Phillips developed a story about an aspiring writer who has trouble finding a job, and has to support himself – as most aspiring writers do – by working odd jobs. His character Mitchell Osgood runs a bookstore when one day he stumbles across a potentially interesting story. If he can investigate and write it down, so Mitchell thinks, it could be his big break as a journalist. The subject of his investigation is a man named Albert Merrick, a serial killer who is up for parole. Who is this man, Mitchell wonders, and what motivated him to commit the awful crimes he was sentenced for?

One of the stars of the film is, undoubtedly, a man behind the scenes: Leonard Rosenman. It was clear to Rosenman and Scott Goldstein that the score should have a progressive, rather than conventional harmonic structure. They agreed that this would help to underscore Merrick's (the antagonist) horrific, troubling visions and this approach would help capture his state of mind musically. Goldstein suggested Rosenman play him some of his concert music as a blueprint for Ambition. Encouraged to be able to draw upon his "progressive" work for the concert stage, Rosenman presented Goldstein with "Foci", a work for chamber orchestra that the composer had written in 1981 and revised in 1983. Goldstein loved what he heard and commenced to use "Foci" as temp music for Ambition. "Foci" is an atonal piece, complex and full of anxiety – exactly what Goldstein needed for his motion picture.