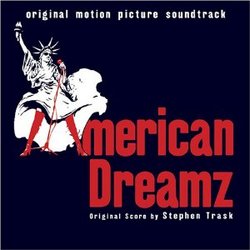 Paul Weitz\'s American Dreamz is a parody of "American Idol". A lame duck president, played by Dennis Quaid , signs on to be a guest judge alongside Hugh Grant\'s Simon Cowell for the American Dreamz finale. The two final contestants on the show are played by Sam Golzari and Mandy Moore, and get most of the singing time in the movie and on the soundtrack. Golzari\'s character, Omer, is a show tune loving, Afghan terrorist-in-training who loves pop culture show tunes, comes to the US to live with affluent cousins, and embraces the American dream. His former Afghan compatriots find him and set him up to kill the president in the finale of the show. Mandy Moore\'s, Sally Kendoo, plays the ambitious all-American blonde beauty who uses her wounded soldier former boy-friend to advance her career while she seduces Hugh Grant. She is a stark contrast to the Middle-Eastern Omer. I won\'t reveal more of the plot lest I spoil the film for those who have not seen it. Needless to say, it moves from the absurd to the ridiculous.

The movie is a fairly enjoyable, soft satire of film about politics and popular culture with a passable soundtrack. Written by Stephen Trask, co-creator of the Broadway mega-hit, Hedwig and the Angry Inch, the soundtrack is sufficient, but it doesn\'t stand out from the film. Given the film\'s comedic focus, it is not a surprise that songs aren\'t vocal masterpieces. The only recognizable cover, Paul Anka\'s "My Way", perhaps the most covered and butchered song of all time, is sung by Golzari with an overly dramatized accent and somewhat unsteady pitch, not unlike what you might hear at a karaoke bar. The rest of the songs are fairly short excerpts of songs performed on the American Dreamz show. Sally Kendoo\'s tongue and cheek pop country tune "Mommy Don\'t Drink Me to Bed Tonight" with its Carrie Underwood undertones and Omer\'s Bo
Bice like rocker "Rockin\' Man" take shots at the manufactured pop of the American Idol catalog, but miss the mark because the songs lack lyrical vison.

The soundtrack is broken up into two categories; generic pop songs and the instrumental score.The score itself wavers between patriotic American orchestral music in the vein of Souza\'s "Stars and Stripes" and standard Hollywood theme music. Tracks like "What Do I Think" and "Post Coitus" exemplify pleasant orchestral theme music that sounds subtle within the film but is less then memorable sans film. Tracks like "Motorcade" and "A Joyful Moment" are triumphant and boisterous themes associated with the President of the United States." They are fully stylized and not overly exciting. Tracks like "Jacuzzi Jihad" serve similar purposes as highly stylized Middle-Eastern themes associated with Omer and his terrorist contingent.

Basically, the film as a whole is a funny and somewhat effective satire. The soundtrack as a whole is prettygood. However, a soundtrack like American Dreamz is only good as background music. It only works in fusion with the rest of the film. I didn\'t focus on any of the music while watching the film and I don\'t think I\'ll listen to the soundtrack again; it too is easily forgettable.