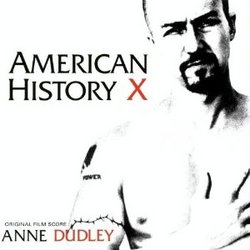 Let me preface this by saying that I have been quite bitter towards Anne Dudley since last year's Academy Awards. I realize that The Full Monty had a good score, but Danny Elfman is one of my personal favorites, so I take it as a personal offense when someone bests him in an awards contest (to put you all on notice, other personal favorites along these lines include Hans Zimmer and Mr. Horner). I must admit, however, that she proved herself on this score.

I love Danny Elfman for his inventive, dark scores. Dudley has pulled off a dark score of an entirely different kind with American History X. There is nothing fanciful about it. There is nothing lighthearted about it. It is probably one of the darkest scores I own. The first track, ("American History X"), and the last track, ("Benedictus"), each utilize a powerful boys choir which migrates its' sound between heavenly and "Ave Satani" (regards Mr. Goldsmith).

The majority of the score is comprised of undertones: truly an incidental piece. Most of the music serves to set the mood for the film. I have had the benefit of attending a sneak preview of the film so I was able to hear the music in its greater context, and it was powerful. She also utilizes a certain amount of counter-programming, which is extraordinarily effective. I keep going back to track 4 ("Playing to Win"). The setting is a basketball game of African American players versus white players, and the outcome of the game is that the loser must forever forfeit the court. It is a wretched idea, of course, and one that would only promote segregation and hate. The music, however, is something you would expect to hear in one of the Rocky films. It is filled with passion, struggle, and triumph, neatly compacted into a 3:49 track. The result is that although you realize you should not feel good about this scene, the music drags you in an entirely different direction. You almost feel guilty for enjoying the music, especially the last few seconds. The specific result for me is that I cannot shake the scene from my memory, as is now true of many scenes from the film. Indeed, in the liners notes, Dudley mentions that the director told her to make the music, "big and elegiac". She said, "The score should stand apart from the events on the screen and underline the deeper implications". That was the objective, and it was accomplished solidly.

The score is laced with the boys choir, and with a few "stingers" for the more shocking moments. Overall, it is a moody score, and one that proves Dudley has a range far greater than one might have imagined. Aside from track 4, track 9 ("Raiders") is a bit of a departure from the introspective feel. It is almost an action piece, but appropriate for its purpose. Overall, the score is a strong representation of what someone questioning the meaning of their existence, and the damage they have done with it, would be experiencing. It is not necessarily the type of music you could listen to easily for very long, but it is worth the attempt.

I believe that this is a taste of what may be to come from Anne Dudley. She has shown tremendous range here. It is also a score representing personal relationships, much like, The Full Monty, but of a much different kind. I am truly impressed.