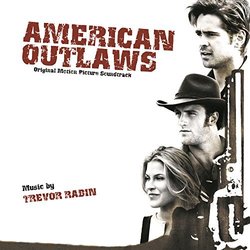 I've got great news for fans of ex-Yes guitarist Trevor Rabin: his popular score for Armageddon is now available in authentic mesquite-smoked Western flavor! Only don't let the label fool you, apparently now they're calling it American Outlaws. With many apologies to Mr. Rabin, I must admit I had been thinking that one up for three days now. But it's certainly not meant to dismiss this nifty new disc from Varese Sarabande. Yes, it's true that Rabin's music for these types of films has a certain sameness to it, but it stands to reason that if you loved his other stuff (and there are a lot of us out there who do, even if we are loathe to admit it) then you'll most likely dig this one too. It's your basic bag of Media Ventures-styled summer action flick tricks with a rustic coat of paint, reminiscent of Thelma & Louise, to boot.

First of all, I haven't seen the movie. You couldn't pay me to see the movie. I have suffered through enough Wing Commanders and Mobsters in my day to recognize a bunch of hip and edgy young actors wanting to play dress up and wasting several million dollars doing so. You wanna see the talented Colin Farrell? Go rent Tigerland. I suppose my point is that you surely don't have to see the movie to enjoy the album. In fact, it might be better that way. You could probably imagine a better movie listening to Rabin's score.

The album kicks off with "Brief Reunion", a mostly kinetic piece based around a driving rhythm for strings, banjo, and steel string guitar. (Caveat emptor: from what my ears can tell, only the guitars on this album are real, with the rest being admittedly impressive synth samples.) We get a quick statement of Rabin's patented Theme-For-The-Noble-Warrior, a downshift into a more plaintive mode, then a return to the driving action material. And you know what? That's pretty much the way the rest of the album plays out as well. Some highlights include "Farewell And Hello, Key West", a nice presentation of Rabin's other patented composition, the sensitive B-Theme for How-The-Hero-Really-Hurts-Inside. Near the end of the cue, Rabin pulls out all the stops with a bonafide Copland-esque fanfare that is truly exhilarating. "Perfect Outlaws" is another stirringly retooled piece of Armageddon's action material, with pounding drums, galloping strings, and a dancing piccolo on top of it. At the other end of the spectrum is "Acoustic Outlaws", all bluesy and dusty guitar work.

You know, I could go on. But I don't think I have to. Fans are so polarized about this type of score, I'd either be screaming at deaf ears or preaching to the converted. Anyone who has heard a Media Ventures action score (or gone to a silly summer blockbuster in the last ten years) already knows what this album sounds like. Just throw in a dash of Western spices and you're there. And for what it is, I think it all works pretty well. A lot of collectors can get pretty snobby about this stuff, but I don't see why. It's kinda like eating fast food. You know you could be eating something more nutritious, but when you're in the mood there is just no substitute.