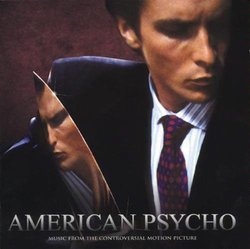 The opening song of the American Psycho soundtrack, Dope's cover of "You Spin Me Round", is alluring. I've not quite heard anything like it before in my life. But as covers go, this was fairly good. The song evokes feelings of anger and frustration, transcending mere pathos of the 80's original and tying back to the film's protagonist, the eponymous American psycho.

Being a period movie, American Psycho includes a number of gems from period bands. These songs are well-known, but not the "#1 hit" immediately associated with the band in question. For example, the inclusion of New Order resulted in "True Faith", an exuberant piece of nostalgia. In a similar vein, "What's On Your Mind (Pure Energy)" by the Information Society made me turn up the stereo, as this was a song I hadn't heard since the last 80's retrospective I heard on the radio. I heard his song and thought, "Oh yeah. I haven't heard this in a while. It's good!" Huey Lewis & The News showed up on the soundtrack with "Hip To Be Square".

Do you like eighties rap? What about East Coast eighties rap? You dig the Leaders of the New School? I do. So I was absolutely delighted to hear a mix of Eric B. and Rakim's "Paid in Full". (To radically simplify the history of hip-hop for the sake of this review, this movement rejected the cheesiness of earlier rap and used harder beats and more street-credible rhyming styles atop jazz-influenced samples before being supplanted by the gangsta rap of the West Coast's NWA.) Listeners will probably recognize the often-sampled verse: "Pump up the volume, pump up the volume / dance, dance!" This same song is revisited in an ambient, barely recognizable form four tracks later on M/A/R/R/S's "Pump Up the Volume". On yet another track, The Racket steps in with a hard rock cover of "Paid in Full", which my "metal" friends fancied.

The requisite torturous song (there's always one on an album I review) is a Euro-pop monstrosity titled "Who Feelin' It." I couldn't quite make out the Abba-esque Scandinavian lyrics, but I heard these fragments: "Can you play for me Marvin Gaye?", "Grandmaster Flash and the Purious [sic]", "Fugees on the scene / a lot Al Green", "do you wanna get jiggy", and the dance anthem "It's good, uh-huh, and you don't stop." If you understand what this song is about, write in and let SoundtrackNet know. We're really confused.

I've neglected to mention that the soundtrack album is interspersed with self-aware commentary by Christian Bale's character, the protagonist Patrick Bateman. Though darkly humorous in the context of American Psycho, the spoken interludes pieces are neither funny nor memorable in the manner of other films' dialogue snippets on soundtracks (e.g, movies such as Pulp Fiction or Casablanca). The "hidden track", the 40th track on the CD, comes the closest to genuine humor, as Bateman defends his ownership of a Whitney Houston album. It's delivered in such a deadpan, however, that without a person seeing the film in advance, the track sounds ridiculous.

I liked the eighties music enough to say that this album merits three out of five stars. Fans of goth may also like this album, as there are sufficient pre/pseudo/quasi-gothic tracks (David Bowie, The Cure, Daniel Ash) to please devotees of the genre.