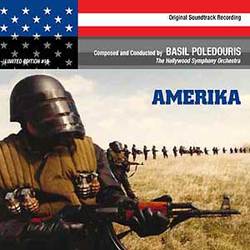 Performed by
The Hollywood Symphony Orchestra

One of the more notable U.S. television projects, Amerika was expensive, elaborate 16 hour mini-series chronicling the ramifications of a Soviet-controlled American nation. The story would delve into the lives of people in positions of power and those without whom both desperately wish to reclaim the country and restore its pride. The series caused great debate on all sides, was a huge ratings success in 1987 and features a multi-thematic, powerful score by Basil Poledouris.

The "Main Title" starts off the story with a rousing orchestral fanfare, a theme mainly of resilience but also covering a strong yearning for home as one remembers it and the struggle to attain this again. It is not a call to arms, as the composer's similarly themed 1985 project Red Dawn was, but something which stirs more internal action on the individual's part. This more intimate portrait is the primary focus of the score, expressed in rich sonorities of strings and subtle, noble brass. "Supper" is an early, lengthy cue moving from despair and loss into the proud fanfare, then to oboe and trumpet solos before finally closing with a sense of reserved hope. The following track, "U.N.S.S.U." details the controlling aspects of the occupying Soviet troops in a tense, insistent march tune. Steady electronic patterns highlight the tension in "Humiliation of Althea". "Ride to Brothel / Helmut & Althea" begins with a melancholy piano and violin duo then evolves into a lovely yet still dark hued waltz-type tune. "Devin's Return" is another lengthy cue, developing the intimate family drama of the story, with strings and woodwinds used delicately.

The fanfare and additional exciting material return in both "All Prisoners" and "Milford Morning", while a tender melody is carried by woodwinds and buoyed by mid-range strings in "Ancestors' Strength". A dirge-like fugue variation on the Russian theme highlights "The Dance Begins", steadily climbing in intensity. Hope is heard again reverentially in "The Homeless' March", with quietly proud strings and woodwinds slowly gaining resolve as a march tempo enters confidently towards the finish. Another great highlight of the score is "Ceremony Montage", a bright, Vivaldi-esque cue propelled by pizzicato strings and an infectiously bouncy melody. "Train To Vladivostock" returns to the more bleak and saddened aspects of the story, with dark brass and strings, while dissonance haunts "The Terrorists Arrive / Capitol Means". Heavy drama dominates the closing tracks as the resistance grows in force and major change occurs, though there is some welcome optimism in the latter half of "We're All Prisoners Now". The bright tones of "Ceremony Montage" help close out the final track, "The Meaning" along with a full orchestral version of the yearning material from the "Main Title".

This is certainly a Poledouris score to be heard by his fans as it contains some powerful dramatic writing by him. It may be not be a powerhouse, energetic work as Flesh & Blood or Starship Troopers, but rewards the listener in its melodies, in its journeys from the despair, tragedy, nobility and resilience and through Poledouris' marvelous musical gifts to display these emotions honestly.