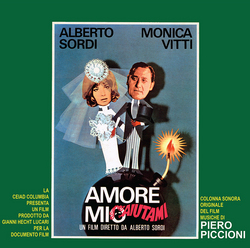 The film has the authoritative signature of Piero Piccioni. Bittersweet comedy about a couple in crisis. At the time, RCA released a 33 rpm album in stereo, very rare today, containing eleven tracks in stereo selected by the composer, where romantic pieces are alternated with refined Lounge music. For this limited edition vinyl re-issue the original album stereo master tape was used with two bonus tracks that were not included at the time.